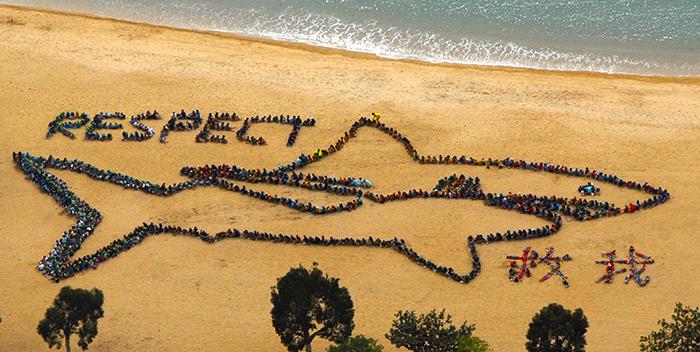 More than 10,200 tons of shark fin were imported into Hong Kong in 2011, and this trade has led to the direct threat of many species of sharks from around the world. The message is clear: the time has come for the Hong Kong Government to enact laws to ban shark fin and related products from the territory.

1000 Hong Kong kids, teachers, and volunteers call for shark conservation by forming a giant shark with a severed fin saying ‘Save Me’ in Chinese (救我). The children then re-attached the fin, dotted the eye, ‘rekindling its spirit,’ and brought the shark back to life as the message of the 2nd annual ‘Kids Ocean Day’ Hong Kong organized by Ocean Recovery Alliance (a Hong Kong and California registered NGO), Malibu Foundation, and Spectral Q from Los Angeles).

The image is based on original drawings from two Hong Kong schoolchildren, one depicting a shark asking for a ‘ban on shark fin soup,’ and the other with a severed fin which said ‘save me’ while building respect for an endangered species that sadly, is universally feared. Their drawings were converted to a large scale aerial art image on the beach by international artist John Quigley, with help from all of the children, but with the fins from children at the Confucian Tai Shing Primary School, and Renaissance College primary students.